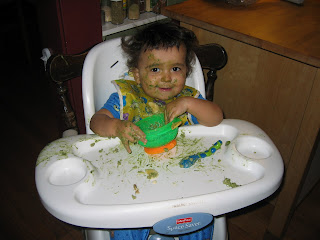 This picture has little to do with this posting but it is recent and symbolic of messiness, which IS somewhat the subject of my get off yer arse and do some writing post for tonight.

We are better at maintaining our sidewalk than our inner commons. During this top 10 Chicago winter, we (mostly Michael) have diligently scraped away each blizzard and dusting from our 25 foot ribbon of walkway. One weekend, I shoveled all the way to the intersection, knowing that the Head Start next door only plows on weekdays. This was early in the season, when I was delighted to finally have a proper winter. Three feet of the white stuff later, and there's less pep in our snow relocation efforts. We clear to the property line and no more.

Our entryway and stairs are another matter. Out front, we are concerned about safety, so we swing into action at the first flake. Inside, we're waiting until spring to bust out a mop. Between the never ending snow, our first floor rehab and our utter exhaustion, the depression-era white, gray and black tiles in the foyer and oak stairs are suffering.

Miguel's bike trailer is stored in the front entry. The tiles under his parking space are covered in dark gray sludge from commute drippings.* The second entry has a thin layer of silt from when we blew insulation into the ceiling. The stairs are daily abraded by salt, plaster, and neglect. We and our guests have to traverse a 3 story moat of grime to get to our apartment, which is one reason we have been horrible about inviting people over lately.

Despite the sub-par conditions, today I let Miguel climb all 47 dirty stairs to get home. He had his snow suit and gloves on (actually, Mommy's wool socks were on his hands, up to his elbows, since he can't keep his gloves on), so I figured, why not? For now, Miguel's stair-climbing tools are his shoes, knees and sock-gloved hands. As long as he didn't lick the stairs (or Mommy's sock-gloves), what did it matter that the stairs were dirty?

I wonder what Miguel was thinking as he finally completed the long journey that he only knows from my or Michael's arms. For 15 plus months--his whole life--he has been swept upstairs. Was he tired? thrilled? unencumbered by analysis? as he crested the last landing? We don't know. I *can* say that I was proud. "Maybe we shouldn't move to the first floor after all," Michael mulled.

*****
*I nearly got stopped by the police yesterday during yet another 5:30pm snow. As I hauled Miguel south on Kimball, I was slowly passed by a squad car, windows rolled down. I looked at them, they looked at me. I sensed. . . .something, a judging maybe, and I didn't like it. I had half a mind to speed up to them at the next light to see what the problem was ("What?? Ya got a problem with me???"), but as I was carrying my son, I instead opted to keep my careful slow and steady course. I needn't have raced anyway, as they stopped for me to catch up to them.

"Is that baby cov. . . " Before he could complete the sentence, he saw that Miguel's trailer DOES have a cover, so no officer, I was not feeding my son a salt and motor oil smoothie for dinner! Somewhat indignantly I explained, "Yes, it's just like a covered stroller, except that the STREETS ARE CLEARER THAN THE SIDEWALKS so it is easier to get home.”

I must have had a better vantage point at stair #47, because I saw that Miguel's face held the same glory that Sir Edmund Hillary must have felt upon first summiting Everest.

I felt very fortunate to be Miguel's sherpa, lugging his diaper bag, to the top.

Gin, GREAT post and even better retort to the cops! Yahoo!!!

err....try newspapers under the trailer parking spot?? a scrap of indoor/outdoor carpet? or would that add to the mess?

Miguel raced into our hearts and days with shocking speed. So while it might seem a bit early to prefix him with cycling lingo, he will always be our Velo Baby!

This blog is for him, for me, for our family and friends, and--perhaps--for others interested in open adoption, living car(e)free in Chicago, brown thumb gardening, and any other musings I can squeeze into my shrinking chunks of free time.

Gin
Chicago, IL, United States
I'm a 2nd generation transvelopede hoping my son will follow in our footsteps and bike tracks with a transit pass in his pocket.